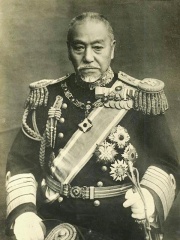 Marshal-Admiral Marquis Tōgō Heihachirō (東郷 平八郎, 27 January 1848 – 30 May 1934), served as a gensui or admiral of the fleet in the Imperial Japanese Navy and became one of Japan's greatest naval heroes. He claimed descent from Samurai Shijo Kingo, and he was an integral part of preserving Japanese artwork. As Commander-in-Chief of the Combined Fleet during the Russo-Japanese War of 1904–1905, he successfully confined the Russian Pacific naval forces to Port Arthur before winning a decisive victory over a relieving fleet at Tsushima in May 1905. Read more on Wikipedia

Tōgō heihachirō is most famous for the Battle of Sekigahara.

Among people born in 1848, Tōgō Heihachirō ranks 12. Before him are Joris-Karl Huysmans, Helmuth von Moltke the Younger, Gustave Caillebotte, Otto of Bavaria, Albert I, Prince of Monaco, and Hugo de Vries. After him are Robert I, Duke of Parma, Arthur Balfour, Princess Louise, Duchess of Argyll, Johann Palisa, Viktor Vasnetsov, and Wilhelm Windelband. Among people deceased in 1934, Tōgō Heihachirō ranks 17. Before him are Raymond Poincaré, Nestor Makhno, Alexander I of Yugoslavia, Santiago Ramón y Cajal, Gregor Strasser, and Engelbert Dollfuss. After him are Gustav Holst, Emma of Waldeck and Pyrmont, Edmond James de Rothschild, Alice Liddell, Louis Barthou, and Augusto César Sandino.