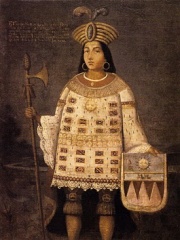 Túpac Amaru (1545 – 24 September 1572) was the last monarch (Sapa Inca) of the Neo-Inca State, the remnants of the Inca Empire in Vilcabamba, Peru. He was executed by the Spanish following a months-long pursuit after the fall of the last stronghold of the Neo-Inca State.The name is also spelled Tupac, Topa, Tupaq, Thupaq, Thupa, or other similar variants, and Amaro instead of Amaru. Read more on Wikipedia

Túpac Amaru was a leader of a native revolt in 1780 in Peru. He and his wife, Micaela Bastidas, were captured and executed by the Spanish.

Among politicians, Túpac Amaru ranks 1,094 out of 15,710. Before him are Ferdinand VI of Spain, Lorenzo de' Medici, Duke of Urbino, Charles II, Archduke of Austria, Avitus, Daoguang Emperor, and Frederick II of Denmark. After him are Wang Mang, John McCain, Khalid of Saudi Arabia, Brennus, Emperor Yingzong of Ming, and Archduchess Marie Valerie of Austria.