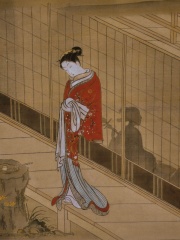 Suzuki Harunobu (Japanese: 鈴木 春信; c. 1725 – 8 July 1770) was a Japanese designer of woodblock print art in the ukiyo-e style. He was an innovator, the first to produce full-color prints (nishiki-e) in 1765, rendering obsolete the former modes of two- and three-color prints. Harunobu used many special techniques, and depicted a wide variety of subjects, from classical poems to contemporary beauties. Read more on Wikipedia

Suzuki Harunobu is most famous for his ukiyo-e woodblock prints. He was a Japanese artist who lived in the Edo period, which is when Japan was closed off from the rest of the world. His artwork was influenced by Western art, and he was one of the first Japanese artists to use Western perspective. He is most famous for his beautiful depictions of women.

Among PAINTERS In Japan