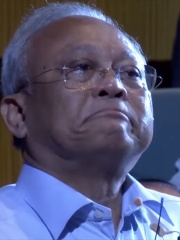 Suthep Thaugsuban (Thai: สุเทพ เทือกสุบรรณ; RTGS: Suthep Thueaksuban, [sù.tʰêːp tʰɯ̂ːak.sù.ban]) (born 7 July 1949) is a Thai former politician and former Member of Parliament for Surat Thani province. Until 2011, he was secretary-general of the Democrat Party and a deputy prime minister under Abhisit Vejjajiva. He resigned his seat in Parliament in November 2013 to become the self-appointed Secretary-general of the People's Democratic Reform Committee, which was conducting mass protests trying to unseat the government of Prime Minister Yingluck Shinawatra. Read more on Wikipedia

Since 2007, the English Wikipedia page of Suthep Thaugsuban has received more than 74,144 page views. Her biography is available in 16 different languages on Wikipedia making her the 12,667th most popular politician.