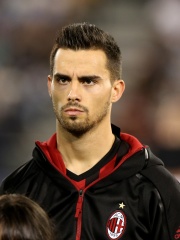 Jesús Joaquín Fernández Sáenz de la Torre (Spanish pronunciation: [xeˈsus xoaˈkim feɾˈnandeθ ˈsaenθ ðe la ˈtore]; born 19 November 1993), known as Suso ([ˈsuso]), is a Spanish professional footballer who plays as a right winger for Spanish club Sevilla and the Spain national team. Scouted by English club Liverpool as a teenager, he made his professional debut there in 2012, playing sparingly and spending a season on loan at Almería before joining AC Milan in January 2015. He was loaned to fellow Serie A club Genoa in January 2016. Read more on Wikipedia

Page views of Susos by language

Among people born in 1993, Suso ranks 46. Before him are Alphonse Areola, Fabinho, Victoria Justice, Garbiñe Muguruza, Miranda Cosgrove, and Jesé. After him are George Ezra, Raphaël Guerreiro, Debby Ryan, Will Poulter, AnnaSophia Robb, and Rosalía.