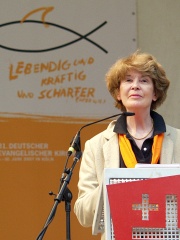 Susan George (born June 29, 1934) is an American and French political and social scientist, activist and writer on global social justice, Third World poverty, underdevelopment and debt. She is the president of the Transnational Institute, a think-tank located in Amsterdam. She is a fierce critic of the present policies of the International Monetary Fund (IMF), World Bank (IBRD) and what she calls their 'maldevelopment model'. Read more on Wikipedia

Among philosophers, Susan George ranks 973 out of 1,081. Before her are Wilfrid Sellars, Philippe Lacoue-Labarthe, Clémence Royer, Alfonso Reyes, Dominicus Gundissalinus, and Phaenias of Eresus. After her are Heymann Steinthal, Dimitri Kitsikis, Stanisław Staszic, Alexander Men, Ecphantus the Pythagorean, and Ram Dass.