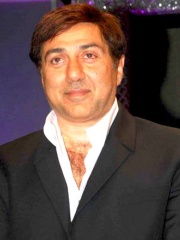 Ajay Singh Deol (born 19 October 1956), better known as Sunny Deol, is an Indian film actor, director, producer, politician and the current member of parliament from Gurdaspur (Lok Sabha constituency) of Punjab State. He is known for his work in Hindi cinema,and has won two National Film Awards and two Filmfare Awards. Deol made his debut opposite fellow debutante Amrita Singh in Betaab (1982), for which he received a Filmfare Best Actor Award nomination. Read more on Wikipedia

Since 2007, the English Wikipedia page of Sunny Deol has received more than 7,692,862 page views. His biography is available in 28 different languages on Wikipedia making him the 4,070th most popular actor.