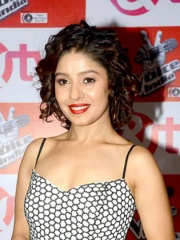 Sunidhi Chauhan (pronounced [sʊnɪd̪i tʃʰoːhən]; born 14 August 1983) is an Indian playback singer. Born in Delhi, she began performing in local gatherings at the age of 5 and made her career debut at the age of 13, with the film Shastra (1996). During the year, she won the first singing reality show titled Meri Awaz Suno and rose to prominence after recording "Ruki Ruki Si Zindagi" from Mast (1999). Read more on Wikipedia

Among singers, Sunidhi Chauhan ranks 3,358 out of 3,541. Before her are Noonie Bao, Jenifer Brening, Evdokia Kadi, Jay Rock, YG, and Jon Walker. After her are Eliza Doolittle, Bonnie McKee, Chance the Rapper, Cashis, Sarah McTernan, and Nina Sublatti.