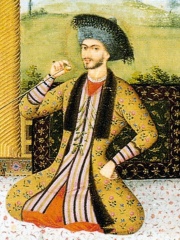 Suleiman I (Persian: شاه سلیمان, romanized: Shah Solayman; born Sam Mirza, February or March 1648 – 29 July 1694) was the eighth and the penultimate Shah of Safavid Iran from 1666 to 1694. He was the eldest son of Abbas II and his concubine, Nakihat Khanum. Born as Sam Mirza, Suleiman spent his childhood in the harem among women and eunuchs and his existence was hidden from the public. In 1666, after the death of his father, the nineteen-year-old Sam Mirza was crowned king under the regnal name, Safi II, after his grandfather, Safi I. Read more on Wikipedia

Suleiman of Persia is most famous for being the ruler of the Ottoman Empire for a long time.

Page views of Suleiman of Persias by language

Among politicians, Suleiman of Persia ranks 3,473 out of 15,577. Before him are Wu Zixu, Prince Louis, Duke of Nemours, Albert III, Duke of Saxony, Osvaldo Dorticós Torrado, Hisham I of Córdoba, and Ulrich von Jungingen. After him are Andrey Bogolyubsky, Döme Sztójay, Isabella of Hainault, Chryses of Troy, Karl Seitz, and Piali Pasha.