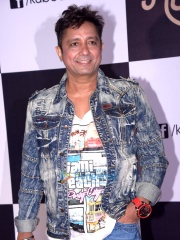 Sukhwinder Singh (born 18 July 1971) is an internationally acclaimed Indian playback singer who primarily sings Bollywood songs. He is famous internationally for singing "Jai Ho" from the film Slumdog Millionaire which won an Academy Award for Best Original Song and a Grammy Award for Best Song Written for a Motion Picture, Television or Other Visual Media. One of his most famous songs is "Chaiyya Chaiyya" from Mani Ratnam's 1998 film Dil Se.., was composed by A. R. Read more on Wikipedia

Among singers, Sukhwinder Singh ranks 3,283 out of 3,541. Before him are Michela Pace, Manel Navarro, Ester Dean, Chieko Ochi, Gianluca Bezzina, and Aesop Rock. After him are Anna Abreu, Duki, Trick-Trick, Action Bronson, Mystikal, and Kratae R-Siam.