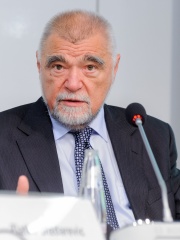 Stjepan "Stipe" Mesić (pronounced [stjêpaːn stǐːpe měːsit͡ɕ]; born 24 December 1934) is a Croatian lawyer and politician who served as President of Croatia from 2000 to 2010. Before serving two five-year terms as president, he was prime minister of SR Croatia (1990) after the first multi-party elections, the last president of the Presidency of Yugoslavia (1991) and consequently secretary general of the Non-Aligned Movement (1991), as well as speaker of the Croatian Parliament (1992–1994), a judge in Našice, and mayor of his hometown of Orahovica.Mesić was a deputy in the Croatian Parliament in the 1960s, and was then absent from politics until 1990 when he joined the Croatian Democratic Union (HDZ), and was named President of the Executive Council (Prime Minister) of the Socialist Republic of Croatia (then still a constituent republic of the SFR Yugoslavia) after HDZ won the elections. His cabinet is, despite holding office before Croatia's independence, considered by the Government of Croatia to have been the first government cabinet of the current Croatian republic. Read more on Wikipedia

Stjepan Mesić is most famous for being the president of Croatia from 2000 to 2010.

Among politicians, Stjepan Mesić ranks 1,273 out of 15,710. Before him are David II of Scotland, Stateira II, Alexios III Angelos, Totila, Archduke Otto of Austria, and Francis, Duke of Guise. After him are Walther Funk, Lech Kaczyński, Perseus of Macedon, Briseis, Theodore I Laskaris, and Michelle Bachelet.