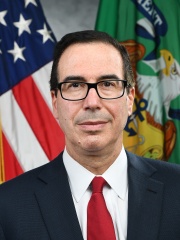 Steven Terner Mnuchin ( mə-NOO-shin; born December 21, 1962) is a senior American politician, investment banker and film producer who is serving as the 77th United States Secretary of the Treasury as part of the Cabinet of Donald Trump. Previously, Mnuchin had been a hedge fund manager and investor. Upon graduating from Yale University in 1985, Mnuchin worked for major investment bank Goldman Sachs where his father, Robert E. Mnuchin, was a General Partner. Read more on Wikipedia

Since 2007, the English Wikipedia page of Steven Mnuchin has received more than 6,097,268 page views. His biography is available in 30 different languages on Wikipedia making him the 12,432nd most popular politician.

Among politicians, Steven Mnuchin ranks 12,330 out of 14,801. Before him are Peter Sutherland, Marc Bazin, Andrea Casiraghi, A. N. R. Robinson, Hamilton Fish, and Ramsey Clark. After him are Gabriela Michetti, Igor Sechin, Andrea Montermini, Desmond Hoyte, Duleep Singh, and Coenwulf of Mercia.