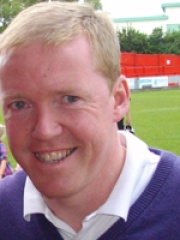 Stephen Staunton (born 19 January 1969) is an Irish association football manager and former professional footballer who played as a defender. He earned 102 caps for the Republic of Ireland national football team, captained his team to the knock-out stage of the 2002 FIFA World Cup and earned his place in the FIFA Century Club. Staunton enjoyed a distinguished club career with Aston Villa, Liverpool and Coventry City. Read more on Wikipedia

Since 2007, the English Wikipedia page of Steve Staunton has received more than 298,049 page views. His biography is available in 27 different languages on Wikipedia making him the 267th most popular coach.

Among coaches, Steve Staunton ranks 276 out of 280. Before him are Leonardo Astrada, Sean Dyche, Dorin Goian, Joe Kinnear, Tatsuma Yoshida, and Andrey Tikhonov. After him are Igor Štimac, Joe Royle, Per Frandsen, Daniele Conti, Nigel Adkins, and Michael O'Neill.

Among COACHES In Ireland

Among coaches born in Ireland, Steve Staunton ranks 2. Before him are Joe Kinnear (null).