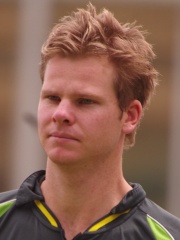 Steven Peter Devereux Smith (born 2 June 1989) is an Australian international cricketer and former captain of the Australian national team. Smith is consistently rated as one of the top-ranked Test batsmen in the world, according to the ICC Player Rankings. Smith has been called the "best since Bradman" due to his distinctively high Test batting average. Read more on Wikipedia

Since 2007, the English Wikipedia page of Steve Smith has received more than 60,938 page views. His biography is available in 17 different languages on Wikipedia making him the 32nd most popular cricketer.

Among cricketers, Steve Smith ranks 40 out of 35. Before him are Kumar Sangakkara, Lasith Malinga, Jacques Kallis, Brett Lee, David Warner, and Ravichandran Ashwin. After him are Phillip Hughes, Michael Clarke, Mohammad Nabi, and Glenn Maxwell.

Among CRICKETERS In Australia