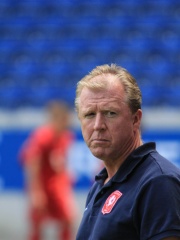 Stephen McClaren (born 3 May 1961) is an English professional football manager and former player who was most recently manager of Queens Park Rangers.McClaren was assistant manager to Sir Alex Ferguson at Manchester United from 1999 to 2001. His managerial career began at Middlesbrough in the Premier League. During his tenure, Middlesbrough won their first (and thus far only) major trophy, the League Cup in 2004. Read more on Wikipedia

Since 2007, the English Wikipedia page of Steve McClaren has received more than 1,309,760 page views. His biography is available in 30 different languages on Wikipedia making him the 187th most popular coach.