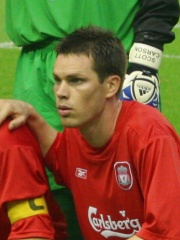 Stephen John Finnan (born 24 April 1976) is an Irish former international footballer who played as a right back. He is the only player to have played in the World Cup, UEFA Champions League, UEFA Cup, Intertoto Cup, all four levels of the English league football and the Football Conference. Among the honours won during his career was the 2005 UEFA Champions League Final for Liverpool. Read more on Wikipedia

Since 2007, the English Wikipedia page of Steve Finnan has received more than 491,674 page views. His biography is available in 35 different languages on Wikipedia making him the 5,389th most popular soccer player.

Among SOCCER PLAYERS In Ireland