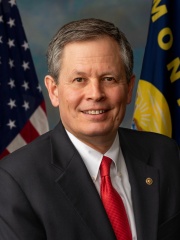 Steven David Daines (born August 20, 1962) is an American businessman and politician serving as the junior United States Senator for Montana since 2015. A Republican, he served as the U.S. Representative for Montana's at-large congressional district from 2013 to 2015. In 2014, Daines won an open seat in the U.S. Senate. Read more on Wikipedia

Since 2007, the English Wikipedia page of Steve Daines has received more than 558,147 page views. His biography is available in 18 different languages on Wikipedia making him the 14,543rd most popular politician.

Among people born in 1962, Steve Daines ranks 515. Before him are Takeshi Ono, Poonam Dhillon, Mark Begich, Sarika, Tomoyoshi Ikeya, and Steve Hodge. After him is James Sie.