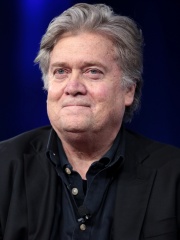 Since 2007, the English Wikipedia page of Steve Bannon has received more than 9,805,726 page views. His biography is available in 41 different languages on Wikipedia making him the 3,250th most popular politician.

Among politicians, Steve Bannon ranks 3,228 out of 14,801. Before him are Ramon Berenguer III, Count of Barcelona, Quirinius, Ne Win, Teos of Egypt, Jean Moulin, and Parysatis II. After him are Ramiro II of Aragon, Joachim II Hector, Elector of Brandenburg, Iziaslav I of Kiev, Charles the Younger, Alfonso II of Asturias, and Emperor Yingzong of Song.