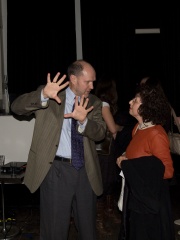 Stephen Martin Walt (born July 2, 1955) is an American professor of international affairs at Harvard University's John F. Kennedy School of Government. He belongs to the realist school of international relations. He made important contributions to the theory of defensive neorealism and has authored the balance of threat theory. Books that he has authored or coauthored include Origins of Alliances, Revolution and War, and The Israel Lobby and U.S. Read more on Wikipedia

Among philosophers, Stephen Walt ranks 1,078 out of 1,089. Before him are Richard Crashaw, Walter Kaufmann, R. C. Sproul, Will Kymlicka, Kwame Anthony Appiah, and N. T. Wright. After him are Alexander Tarasov, Christine Korsgaard, Colin McGinn, William A. Dembski, Michel Weber, and Taraneh Javanbakht.