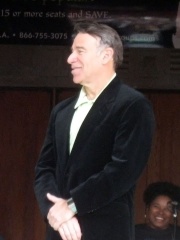 Stephen Lawrence Schwartz (born March 6, 1948) is an American musical theater lyricist and composer. In a career spanning over four decades, Schwartz has written such hit musicals as Godspell (1971), Pippin (1972), and Wicked (2003). He has contributed lyrics to a number of successful films, including Pocahontas (1995), The Hunchback of Notre Dame (1996), The Prince of Egypt (1998, music and lyrics), and Enchanted (2007). Read more on Wikipedia

Since 2007, the English Wikipedia page of Stephen Schwartz has received more than 34,693 page views. His biography is available in 19 different languages on Wikipedia making him the 984th most popular composer.