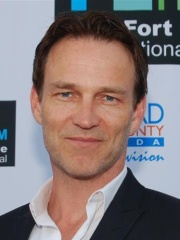 Stephen Moyer (born Stephen John Emery; 11 October 1969) is an English film and television actor and director who is best known as vampire Bill Compton in the HBO series True Blood. He was born in Brentwood, Essex and attended St Martin's, a comprehensive school in Hutton, Essex. His first television role was in 1993 as Philip Masefield in the TV adaptation of the play Conjugal Rites, written by actor/playwright Roger Hall.This was followed by the television film Lord of Misrule, filmed in Fowey, Cornwall, which also featured Richard Wilson, Emily Mortimer and Prunella Scales. Read more on Wikipedia

Since 2007, the English Wikipedia page of Stephen Moyer has received more than 3,478,713 page views. His biography is available in 29 different languages on Wikipedia making him the 4,401st most popular actor.