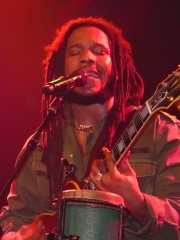 Stephen Robert Nesta Marley (born April 20, 1972) is a Jamaican-American musician who is the son of Bob Marley and his wife Rita Marley. Marley is an eight-time Grammy Award winner, three times as a solo artist, twice as a producer of younger brother Damian Marley's Halfway Tree and Welcome to Jamrock albums, and a further three times as a member of his older brother Ziggy Marley's group Ziggy Marley & The Melody Makers. Marley's 2011 album Revelation Pt. Read more on Wikipedia

Since 2007, the English Wikipedia page of Stephen Marley has received more than 49,950 page views. His biography is available in 18 different languages on Wikipedia making him the 1,729th most popular singer.