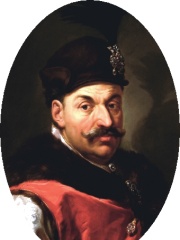 Stephen Báthory (Hungarian: Báthory István; Polish: Stefan Batory; Lithuanian: Steponas Batoras; 27 September 1533 – 12 December 1586) was Voivode of Transylvania (1571–1576), Prince of Transylvania (1576–1586), King of Poland and Grand Duke of Lithuania (1576–1586). The son of Stephen VIII Báthory and a member of the Hungarian Báthory noble family, Báthory was a ruler of Transylvania in the 1570s, defeating another challenger for that title, Gáspár Bekes. In 1576 Báthory became the husband of Queen Anna Jagiellon and the third elected king of Poland. Read more on Wikipedia

Stephen Báthory was a Hungarian prince, who was the King of Poland and Grand Duke of Lithuania. He is most famous for his military victories against the Ottoman Empire and his rule over the Polish-Lithuanian Commonwealth.

Among politicians, Stephen Báthory ranks 483 out of 15,710. Before him are Emperor Gaozu of Han, Gustaf V of Sweden, Louis VII of France, Şehzade Bayezid, Sergio Mattarella, and Alexios I Komnenos. After him are Louis VIII of France, Imre Nagy, Frederick IX of Denmark, Moshe Dayan, William IV of the United Kingdom, and Maximilian I of Mexico.