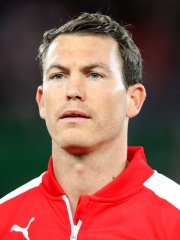 Stephan Lichtsteiner (German pronunciation: [lɪçtʃtaɪnər]; born 6 October 1984) is a Swiss former professional footballer. An attacking right-back or wing-back, he was known for his energetic runs down the right wing, as well as his stamina and athleticism, which earned him the nicknames "Forrest Gump" and "The Swiss Express".He began his professional career with Grasshopper, winning a league title in 2002–03, and moved to Lille in 2005, helping the French club to Champions League qualification in his first season with the team. In 2008, he joined Italian club Lazio, and won both the Coppa Italia and Supercoppa Italiana the following year. Read more on Wikipedia