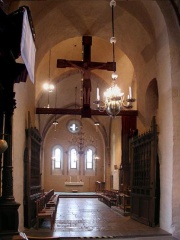 Stenkil (Old Norse: Steinkell) was a King of Sweden who ruled c. 1060 until 1066. He succeeded Emund the Old and became the first king from the House of Stenkil. Read more on Wikipedia

Stenkil was the king of Sweden from 1060-1066. He is most famous for his introduction of Christianity to Sweden.

Page views of Stenkils by language

Among politicians, Stenkil ranks 3,959 out of 15,577. Before him are Joachim I Nestor, Elector of Brandenburg, Norodom of Cambodia, Maria Beatrice d'Este, Duchess of Massa, Claudia de' Medici, Margaret, Countess of Tyrol, and Xi Zhongxun. After him are Maria Theresa of Austria-Este, Queen of Sardinia, Jangsu of Goguryeo, Naina Yeltsina, Eric III of Denmark, Ruzi Ying, and Paolo Lucio Anafesto.

Among people born in 1030, Stenkil ranks 6. Before him are Romanos IV Diogenes, Bruno of Cologne, Vsevolod I of Kiev, Emund the Old, and Stanislaus of Szczepanów. After him are Baldwin VI, Count of Flanders, Anna Dalassene, Lulach, Gertrude of Saxony, Sigebert of Gembloux, and Conan II, Duke of Brittany. Among people deceased in 1066, Stenkil ranks 4. Before him are Harold Godwinson, Edward the Confessor, and Harald Hardrada. After him are Al-Bayhaqi, Elisiv of Kiev, Muniadona of Castile, Tostig Godwinson, Gottschalk, Yahya of Antioch, Udayadityavarman II, and Conan II, Duke of Brittany.