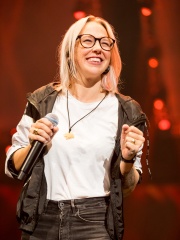 Stefanie Fabienne Heinzmann (born 10 March 1989) is a Swiss pop singer and television personality. She gained public interest in early 2008 when she won SSDSDSSWEMUGABRTLAD, a talent contest hosted in Stefan Raab's late-night-show TV total on the German ProSieben network. Following her win, Heinzmann released her debut single "My Man Is a Mean Man," which debuted straight atop the Swiss Singles Chart and became a top ten hit in Austria and Germany. Read more on Wikipedia

Among singers, Stefanie Heinzmann ranks 3,084 out of 3,541. Before her are Sky Ferreira, Moran Mazor, Rebecca Black, Hind Laroussi, Kasia Moś, and Will Young. After her are Brandi Carlile, Leonora, David Civera, Kurt Vile, Stephanie, and Jaci Velasquez.

Among SINGERS In Switzerland