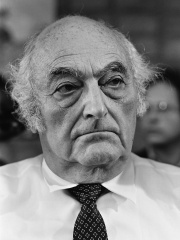 Helmut Flieg or Hellmuth Fliegel (10 April 1913 – 16 December 2001) was a German writer, known by his pseudonym Stefan Heym (pronounced [ˈʃtɛfan ˈhaɪm] (listen)). He lived in the United States and trained at Camp Ritchie, making him one of the Ritchie Boys of World War II. In 1952, he returned to him home to the part of his native Germany which was, from 1949 to 1990, the German Democratic Republic (GDR, "East Germany"). He published works in English and German at home and abroad, and despite longstanding criticism of the GDR remained a committed socialist. Read more on Wikipedia

Among writers, Stefan Heym ranks 2,126 out of 5,794. Before him are Herbert Read, Janus Pannonius, Orderic Vitalis, Bâkî, Prince Henri of Orléans, and Dexippus. After him are Robert Jordan, Ida Tarbell, David Morrell, Paul Hazard, Herman Bang, and Irvine Welsh.