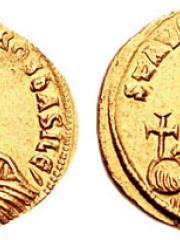 Staurakios or Stauracius (Greek: Σταυράκιος; early 790s – 11 January 812 AD) was Byzantine emperor from 26 July to 2 October 811. He was born in the early 790s, probably between 791 and 793, to Nikephoros I and an unknown woman. Nikephoros seized the throne of the Byzantine Empire from Empress Irene in 802, and elevated Staurakios to co-emperor in December 803. Read more on Wikipedia

Staurakios is most famous for being the only Byzantine emperor to be killed in battle.

Page views of Staurakios by language

Among politicians, Staurakios ranks 1,888 out of 15,710. Before him are Sancho I of Portugal, Prince Marko, Marie Thérèse Louise of Savoy, Princesse de Lamballe, Titus Tatius, Amasis II, and Karl Hanke. After him are Aurelius Victor, Tiu, Sunjo of Joseon, Al-Hajjaj ibn Yusuf, Muwatalli II, and Kilij Arslan I.