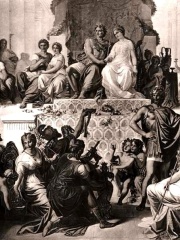 Stateira II (Greek: Στάτειρα; died 323 BC), possibly also known as Barsine, was the daughter of Stateira I and Darius III of Persia. After her father's defeat at the Battle of Issus, Stateira and her sisters became captives of Alexander of Macedon. They were treated well, and she became Alexander's second wife at the Susa weddings in 324 BC. At the same ceremony Alexander also married her cousin, Parysatis, daughter of Darius' predecessor. Read more on Wikipedia

Stateira II was the wife of Alexander the Great and the daughter of Darius III. After the death of Alexander, she married her uncle, Arrhidaeus, who was the son of Philip II of Macedon. She became the Queen of Persia and the mother of Alexander IV.

Among politicians, Stateira II ranks 1,268 out of 15,710. Before her are Sauli Niinistö, Casimir IV Jagiellon, Tongzhi Emperor, Ion Iliescu, Grand Duchess Anna Petrovna of Russia, and David II of Scotland. After her are Alexios III Angelos, Totila, Archduke Otto of Austria, Francis, Duke of Guise, Stjepan Mesić, and Walther Funk.

Others Deceased in 323 BC