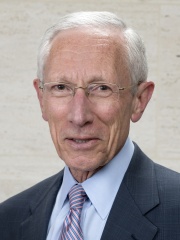 Stanley Fischer (Hebrew: סטנלי פישר‎; born October 15, 1943) is an Israeli American economist and former vice chairman of the Federal Reserve. Born in Northern Rhodesia (now Zambia), he holds dual citizenship in Israel and the United States. He served as governor of the Bank of Israel from 2005 to 2013. Read more on Wikipedia

Since 2007, the English Wikipedia page of Stanley Fischer has received more than 451,752 page views. His biography is available in 22 different languages on Wikipedia making him the 210th most popular economist.