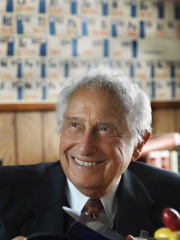 Stanford Robert Ovshinsky (November 24, 1922 – October 17, 2012) was an American engineer, scientist and inventor who over a span of fifty years was granted well over 400 patents, mostly in the areas of energy and information. Many of his inventions have had wide ranging applications. Among the most prominent are: an environmentally friendly nickel-metal hydride battery, which has been widely used in laptop computers, digital cameras, cell phones, and electric and hybrid cars; flexible thin-film solar energy laminates and panels; flat screen liquid crystal displays; rewritable CD and DVD discs; hydrogen fuel cells; and nonvolatile phase-change memory.Ovshinsky opened the scientific field of amorphous and disordered materials in the course of his research in the 1940s and 50s in neurophysiology, neural disease, the nature of intelligence in mammals and machines, and cybernetics. Read more on Wikipedia

Since 2007, the English Wikipedia page of Stanford R. Ovshinsky has received more than 89,512 page views. His biography is available in 15 different languages on Wikipedia making him the 317th most popular inventor.