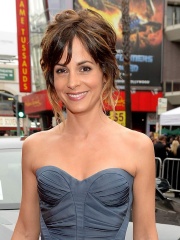 Stéphanie Szostak (born August 5, 1975) is a French actress who started her career in the early 2000s. Szostak is best known for having appeared in the films The Devil Wears Prada, Dinner for Schmucks, Iron Man 3, and R.I.P.D. Read more on Wikipedia

Since 2007, the English Wikipedia page of Stéphanie Szostak has received more than 1,130,308 page views. Her biography is available in 18 different languages on Wikipedia making her the 7,060th most popular actor.

Among actors, Stéphanie Szostak ranks 6,974 out of 8,832. Before her are Lily Cole, André Holland, Steven Mackintosh, Kelly Blatz, Adèle Haenel, and Sara Paxton. After her are Natacha Régnier, Valerie Bertinelli, Jodhi May, Kathryn Prescott, Peter DeLuise, and Jesse Lee Soffer.