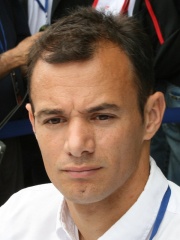 Stéphane Jean-Marc Sarrazin (born 2 November 1975) is a French professional racing driver. He has won races across a number of single-seater, sportscar and rallying disciplines and competitions, was French Formula Renault champion in 1994, and Le Mans Series champion in both 2007 and 2010. He has finished on the podium six times at the 24 Hours of Le Mans race, including four outright second positions, although he has never won. Read more on Wikipedia

Since 2007, the English Wikipedia page of Stéphane Sarrazin has received more than 112,409 page views. His biography is available in 21 different languages on Wikipedia making him the 617th most popular racing driver.