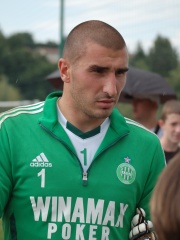 Stéphane Ruffier (French pronunciation: ​[stefan ʁyfje]; born 27 September 1986) is a French professional footballer who plays as a goalkeeper for Ligue 1 club AS Saint-Étienne. He previously played for AS Monaco from 2005 to 2011, serving as the first-choice goalkeeper and captain of the club. Ruffier is also a French international, and made his senior debut on 11 August 2010 in a friendly match against Norway. Read more on Wikipedia

Since 2007, the English Wikipedia page of Stéphane Ruffier has received more than 201,046 page views. His biography is available in 31 different languages on Wikipedia making him the 4,796th most popular soccer player.