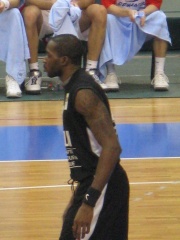 Yann Ulrich Stéphane Lasme (born December 17, 1982) is a Gabonese professional basketball player. He played college basketball at the University of Massachusetts (UMass), with the UMass Minutemen, and he was selected by the Golden State Warriors in the second round, 46th overall, in the 2007 NBA draft. Read more on Wikipedia

Since 2007, the English Wikipedia page of Stéphane Lasme has received more than 130,108 page views. His biography is available in 21 different languages on Wikipedia making him the 309th most popular basketball player.