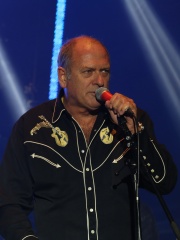 Philip "Spike" Edney (born 11 December 1951 in Portsmouth, Hampshire, England) is an English musician who, since the early 1970s, has performed with a number of bands, most notably with Queen in their live concerts, where his participation started in 1984. In the earlier phase of his career, during the mid-1970s, he recorded and toured with The Tymes and Ben E. King, playing keyboards, bass, guitar and trombone. Subsequently, in the late 1970s, he was musical director for Edwin Starr and, during the early 1980s, worked with Duran Duran, The Boomtown Rats, Dexys Midnight Runners, Bucks Fizz, Haircut One Hundred and The Rolling Stones. Read more on Wikipedia

Since 2007, the English Wikipedia page of Spike Edney has received more than 313,809 page views. His biography is available in 16 different languages on Wikipedia making him the 1,411th most popular musician.