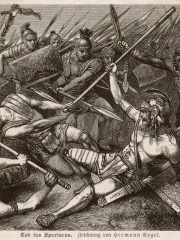 Spartacus (Greek: Σπάρτακος Spártakos; Latin: Spartacus; c. 111–71 BC) was a Thracian gladiator who, along with Crixus, Gannicus, Castus, and Oenomaus, was one of the escaped slave leaders in the Third Servile War, a major slave uprising against the Roman Republic. Little is known about him beyond the events of the war, and surviving historical accounts are sometimes contradictory. Read more on Wikipedia

Spartacus was a Thracian slave who led a major slave rebellion in the Roman Republic.

Page views of Spartacuses by language

Among military personnels, Spartacus ranks 7 out of 1,468. Before him are Genghis Khan, Alexander the Great, Joan of Arc, Timur, Charles de Gaulle, and Karl Dönitz. After him are Erwin Rommel, Charles Martel, Adolf Eichmann, Themistocles, William Wallace, and Khalid ibn al-Walid.

Others Deceased in 71 BC