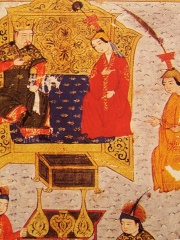 Sorghaghtani Beki (Mongolian: Сорхагтани Бэхи/ᠰᠣᠷᠬᠠᠭᠲᠠᠨᠢ ᠪᠡᠬᠢ; Chinese: 唆魯禾帖尼) or Bekhi (Bek(h)i is a title), also written Sorkaktani, Sorkhokhtani, Sorkhogtani, Siyurkuktiti (c. 1190 – 1252), posthumous name Empress Xianyi Zhuangsheng (Chinese: 顯懿莊聖皇后; pinyin: Xiǎnyì Zhuāngshèng Huánghòu), was a Keraite princess and daughter-in-law of Genghis Khan. Married to Tolui, Genghis' youngest son, Sorghaghtani Beki became one of the most powerful and competent people in the Mongol Empire. She made policy decisions at a pivotal moment that led to the transition of the Mongol Empire towards a more cosmopolitan and sophisticated style of administration. Read more on Wikipedia

Sorghaghtani Beki is most famous for being the mother of Mahmud of Ghazni, the ruler of the Ghaznavid Empire.

Among noblemen, Sorghaghtani Beki ranks 166 out of 842. Before her are Ramesses IX, Grand Duke Konstantin Nikolayevich of Russia, Daniel of Moscow, Maria Anna of Bavaria, Frederick, Prince of Wales, and Rupprecht, Crown Prince of Bavaria. After her are Giovanni Borgia, 2nd Duke of Gandia, Béla II of Hungary, Grand Duke Paul Alexandrovich of Russia, Willem-Alexander of the Netherlands, Duchess Mathilde Ludovika in Bavaria, and Archduchess Anna of Austria.

Among people born in 1190, Sorghaghtani Beki ranks 2. Before her is Pope Clement IV. After her are Sundiata Keita, Vincent of Beauvais, Jordan of Saxony, Maria of Brabant, Holy Roman Empress, Władysław Odonic, Theodora Angelina, Theobald VI, Count of Blois, and Indravarman II. Among people deceased in 1252, Sorghaghtani Beki ranks 5. Before her are Blanche of Castile, Giovanni da Pian del Carpine, Ferdinand III of Castile, and Abel, King of Denmark. After her are Isabella, Queen of Armenia, Peter of Verona, Rose of Viterbo, Otto I, Duke of Brunswick-Lüneburg, Bohemond V of Antioch, Sviatoslav III of Vladimir, and Zdislava Berka.

Among NOBLEMEN In Mongolia