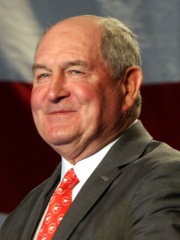 George Ervin "Sonny" Perdue III (born December 20, 1946) is an American veterinarian, businessman, and politician who served as the 31st United States Secretary of Agriculture from 2017 to 2021. He previously served as the 81st governor of Georgia from 2003 to 2011; Perdue was the first Republican to hold the office since the Reconstruction era.Founder and partner in an agricultural trading company, Perdue served from 2012 to 2017 on the Governors' Council of the Bipartisan Policy Center in Washington, D.C. He is the second secretary of agriculture from the Deep South; the first was Mike Espy of Mississippi, who served under President Bill Clinton from January 1993 to December 1994. On January 18, 2017, President-elect Donald Trump announced that he would nominate Perdue to be Secretary of Agriculture. His nomination was transmitted to the U.S. Read more on Wikipedia