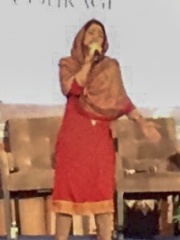 Sonita Alizadeh (Persian: سونیتا علیزاده‎; born 1996) is an Afghan rapper and activist who has been vocal against forced marriages. Alizadeh first gained attention when she released "Brides for Sale," a video in which she raps about daughters being sold into marriage by their families. With the help of Rokhsareh Ghaem Maghami, an Iranian documentary filmmaker who over three years documented her story in the film Sonita, Alizadeh filmed the video to escape a marriage her parents were planning for her, even though it is illegal for women to sing publicly in Iran, where she was living at the time. Read more on Wikipedia

Among SOCIAL ACTIVISTS In Afghanistan

Among social activists born in Afghanistan, Sonita Alizadeh ranks 3. Before her are Jamāl al-Dīn al-Afghānī (1837) and Meena Keshwar Kamal (1956).