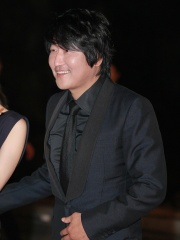 Song Kang-ho (Hangul: 송강호, Korean pronunciation: [soːŋ.kɐŋɦo]; born 17 January 1967) is a South Korean actor who rose to international prominence for his performances in Snowpiercer (2013) and Parasite (2019), the latter of which won the Palme d'Or at the Cannes Film Festival and the Academy Award for Best Picture.Song made his debut as a movie actor in The Day a Pig Fell into the Well in 1996, and came to national prominence with a series of critically acclaimed performances, including No. 3, Joint Security Area, Sympathy for Mr. Read more on Wikipedia

Since 2007, the English Wikipedia page of Song Kang-ho has received more than 2,338,867 page views. His biography is available in 19 different languages on Wikipedia making him the 2,381st most popular actor.