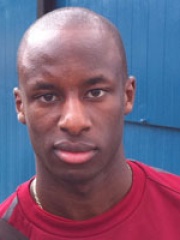 Omatsone Folarin "Sone" Aluko (born 19 February 1989) is a professional footballer who plays as a forward or winger for Reading of the EFL Championship, and for the Nigeria national team. Aluko began his career at Birmingham City but failed to make any league appearances. He joined Aberdeen on loan in the 2007–08 season and was loaned to Blackpool at the beginning of the 2008–09 season. Read more on Wikipedia

Since 2007, the English Wikipedia page of Sone Aluko has received more than 474,709 page views. His biography is available in 22 different languages on Wikipedia making him the 11,899th most popular soccer player.