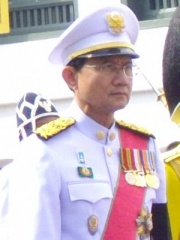 Somchai Wongsawat (Thai: สมชาย วงศ์สวัสดิ์, pronounced [sǒm.t͡ɕʰāːj wōŋ.sā.wàt]; born 31 August 1947) is a Thai politician who was the prime minister of Thailand in 2008 and a former executive member of the People's Power Party (PPP) whose political rights were disenfranchised by the Constitutional Court (ConCourt) for five years. Prior to entering electoral politics, he had served civil service and judicial service, having been appointed Permanent Secretary of Justice (the highest non-elected position in the civil service) in 2000 by the government of Chuan Leekpai. Following his retirement from office in 2006 owing to the pensionable age, he entered politics after the 2006 coup unseating the government of his brother-in-law, Thaksin Shinawatra. Read more on Wikipedia

Among politicians, Somchai Wongsawat ranks 10,026 out of 15,577. Before him are Vasiľ Biľak, Jason of Pherae, Julius Oppert, Alexander Shliapnikov, Pietro Grimani, and Ashikaga Yoshikatsu. After him are Ingvar of Kiev, Zalmay Khalilzad, Enshakushanna, Giuseppe Zanardelli, Nikolay Raevsky, and Nikolaus, Hereditary Grand Duke of Oldenburg.