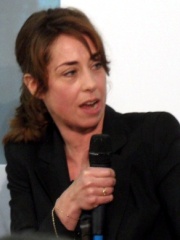 Sofie Gråbøl (Danish pronunciation: [soˈfiˀə ˈkʁʌpøl]; born 30 July 1968) is a Danish actress. She has starred in a number of films, with her breakthrough role in the 1986 Danish film Early Spring, directed by Astrid Henning-Jensen, playing the lead role in the film version of Tove Ditlevsen's novel Barndommens gade when she was 17 years old. On television she has starred in Taxa and Nikolaj og Julie.Gråbøl has become known in Denmark for playing emotional roles, but she achieved international fame as a detective—the cool and distant lead character Inspector Sarah Lund in all three series of The Killing (Danish: Forbrydelsen). Read more on Wikipedia