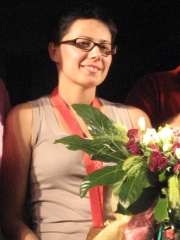 Snježana Pejčić (born 13 July 1982) is a Croatian athlete who competes in shooting. Her first notable success was winning silver at the Juniors European Shooting Championship in Thessaloniki in 2002, and she won second place at an ISSF World Cup held in Munich in 2008. She took up sports shooting at the age of 15 and she is a member of Lokomotiva sport shooting club in Rijeka. Read more on Wikipedia

Since 2007, the English Wikipedia page of Snježana Pejčić has received more than 12,941 page views. Her biography is available in 16 different languages on Wikipedia making her the 1,451st most popular athlete.