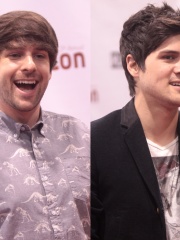 Smosh is an American sketch comedy YouTube channel created by Anthony Padilla and Ian Hecox. In 2002, Padilla created a website named "smosh.com" for making flash animations, and he was later joined by Hecox. Soon afterward, they began to post videos on Smosh's YouTube channel in the autumn of 2005 and quickly became one of the most popular channels on the site. Read more on Wikipedia

Since 2007, the English Wikipedia page of Smosh has received more than 3,151,580 page views. Her biography is available in 32 different languages on Wikipedia making her the 7,119th most popular youtuber.

Page views of Smoshes by language

Among youtubers, Smosh ranks 2 out of 13. Before her are PewDiePie. After her are Rémi Gaillard, Daniel Howell, Pat Condell, Shane Dawson, Marzia Bisognin, Markiplier, Jenna Marbles, Michael Stevens, Zoella, and Ryan Higa.