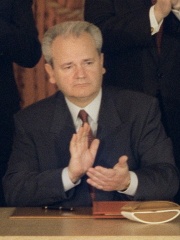 Slobodan Milošević (Serbian Cyrillic: Слободан Милошевић, pronounced [slobǒdan milǒːʃeʋitɕ] (listen); 20 August 1941 – 11 March 2006) was a Yugoslav and Serbian politician who served as the president of Serbia within Yugoslavia from 1989 to 1997 (originally the Socialist Republic of Serbia, a constituent republic of the Socialist Federal Republic of Yugoslavia, from 1989 to 1992) and president of the Federal Republic of Yugoslavia from 1997 to 2000. He led the Socialist Party of Serbia from its foundation in 1990 and rose to power as Serbian president during efforts to reform the 1974 Constitution of Yugoslavia in response to alleged marginalization of Serbia, views that Serbia's autonomous provinces had too much power, making them almost independent from Serbia, and claims of political incapacity to deter Albanian separatist unrest in Serbia's autonomous province of Kosovo.Milošević's presidency of Serbia and the Federal Republic of Yugoslavia was marked by several major reforms to Serbia's constitution from the 1980s to the 1990s that reduced the powers of Serbia's autonomous provinces. In 1990, Serbia transitioned from a Titoist one-party system to a multi-party system and attempted reforms to the 1974 Yugoslav Constitution. Read more on Wikipedia

Slobodan Milošević is most famous for leading the Yugoslavian wars in the 1990s. He was convicted of war crimes and crimes against humanity and sentenced to 27 years in prison in 2006.

Among politicians, Slobodan Milošević ranks 203 out of 15,710. Before him are Osman II, Muawiyah I, Anwar Sadat, Frederick the Great, Silvio Berlusconi, and Odoacer. After him are Henry VII of England, Catherine I of Russia, Rudolf Hess, Akbar, Charles X of France, and Napoleon II.