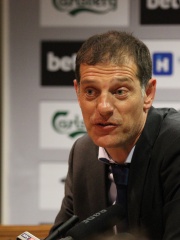 Slaven Bilić (pronounced [slǎʋen bǐːlitɕ]; born 11 September 1968) is a Croatian professional football manager and former player who is the head coach of Chinese Super League club Beijing Guoan. Bilić, who played as a defender, began his career in 1988 with his hometown club Hajduk Split, later having successful spells with Karlsruher SC in Germany, and West Ham United and Everton in England before retiring from active football in 2001. At the international level, Bilić served as one of Croatia's most consistent defenders during the tenure of coach Miroslav Blažević, earning 44 caps between 1992 and 1999, and playing in UEFA Euro 1996 and the 1998 FIFA World Cup, helping the team to the third place at the latter tournament. Read more on Wikipedia