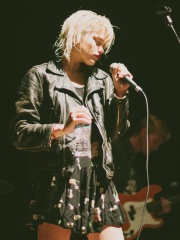 Sky Tonia Ferreira (born July 8, 1992) is an American singer, songwriter, model, and actress. As a teenager, Ferreira began uploading videos on Myspace of herself singing songs she had written, which led to her discovery by producers Bloodshy & Avant and a recording contract with Parlophone in 2009. She released her first extended play, As If!, in 2011, which combined elements of electropop and dance music. Read more on Wikipedia

Among singers, Sky Ferreira ranks 3,077 out of 3,541. Before her are Immortal Technique, Mabel, Francesca Michielin, Andy Abraham, Gareth Gates, and Esmée Denters. After her are Moran Mazor, Rebecca Black, Hind Laroussi, Kasia Moś, Will Young, and Stefanie Heinzmann.