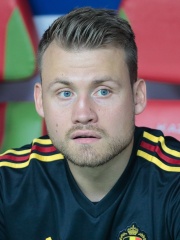 Simon Luc Hildebert Mignolet (Dutch pronunciation: [ˈsimɔn ˈmiɲɔˌlɛː], French: [simɔ̃ miɲɔlɛ]; born 6 March 1988) is a Belgian professional footballer who plays as a goalkeeper for Belgian club Club Brugge and the Belgium national team. Mignolet started his career with Belgian Second Division side Sint-Truiden in 2004, and spent six years with the club, making 100 senior league appearances and scoring a goal. He moved to Premier League side Sunderland in June 2010 for £2 million, spending three years with them and making 101 appearances across all competitions before moving to Liverpool in June 2013 for £9 million.Mignolet has represented the Belgium national team at every level from under-16 upwards. Read more on Wikipedia